Two housing sites at Stirling Road and Lorong 1 Realty Park were launched for sale by public tender by the Urban Redevelopment Authority (URA) on Thursday (21 April).

Offered on a 99-year leasehold tenure, both sites can potentially yield about 1,160 units. 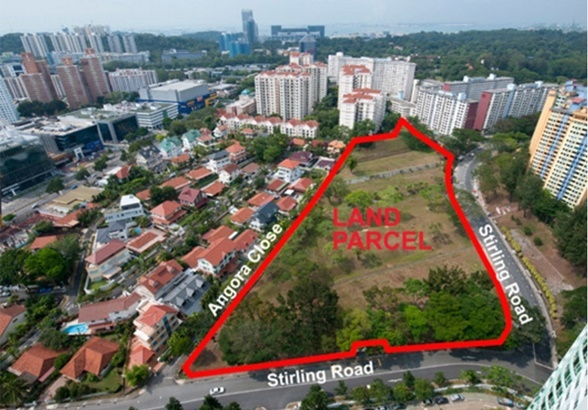 Originally, this site was released for sale as two smaller adjacent plots in March 2010, but these were subsequently combined and offered as a single parcel via the 1H 2012 Reserve List. It was triggered for sale after URA announced on 10 April 2017 that a developer has committed to a minimum bid price of S$685.25 million.

Meanwhile, the 13,398.6 sq m site at Lorong 1 Realty Park is zoned for conventional and/or strata landed homes. Expected to yield about 50 residential properties, the plot has been released for sale via the Confirmed List of the 1H 2017 Government Land Sales (GLS) Programme.

The tender for the Stirling Road site will close on 18 May 2017, while that for the land parcel at Lorong 1 Realty Park will close on 1 June of the same year.

According to JLL’s Head of Research & Consultancy for Singapore, Tay Huey Ying, both sites are expected to see keen biddings by developers. But the Stirling Road plot is unlikely to see a large turnout similar to that of the recently tendered Toh Tuck Road site due to its high price tag.

In fact, Tricia Song, Research Head at Colliers International Singapore, expects eight to 12 bids for the plot compared to the 24 bids received for the Toh Tuck Road site. The offered quantum could range from S$811 million to S$907 million, or S$850 psf to S$950 psf.

Moreover, Tay opined that the substantial unsold supply in the locality could tame the bids as there are currently over 1,500 unsold units in nearby launched and yet-to-be-launched projects, including in Alex Residences (127 unsold units), Commonwealth Tower (306 unsold units), Queens Peak (415 unsold units) and the upcoming 400-unit Artra project.

Similarly, Song estimates that the development of the Stirling Road site will increase the area’s housing supply by 30 percent, but she reckons that the units at two ongoing launches, Queens Peak and Commonwealth Tower, could be significantly absorbed by the market by the time this project is launched.

As for the site at Lorong 1 Realty Park, Tay believes that it could see better turnout than the Stirling Road site given its more palatable price quantum, its location within the established Upper Serangoon area, and the dearth of sites for landed homes in the market.

“The last time a landed site was sold under the GLS programme was four years ago in June 2013, when the Victoria Park Villas parcel was awarded after being strongly contested by 12 bidders,” noted Tay.